skip to main | skip to sidebar

January was a month that was marked not by extreme skiing, but rather by extreme mathematics II, which I had to pass. It was not pushing the vertical limits, but instead the limits of my intellect. And as any other challenge, I looked it strait in the eyes. On 24th of January I passed the exam - won the game - but still kept all the respect for my opponent. It again proved my point that all you need is a ton of stubbornness and only a drop of talent, and there are no mountains that stay insurmountable! 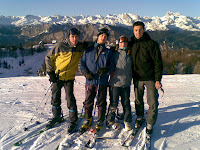 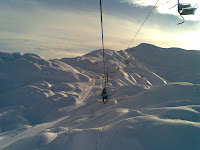 So it didn't take very long for the mountain bandits to assemble again; and there we were on a beautiful Friday morning seduced by divine skiing slopes of the Vogel resort. We skied the whole day like crazy, until the chilly sunset chased us back to Zor's summer house in the valley. Ohh, don't let me forget, we first attacked the monster pizzas at lake Bohinj, which are definitely "insurmountable." (My friend Pecnik, is still getting ready to prove me wrong - and I just cant wait to see:)" Anyways, all four of us were hungry like animals, and were still extremely optimistic when we ordered 3 pizzas. We were fighting with them like old hungry veterans, however could only finish two and a half. The battle lost, but the fight continues! Next time we will arm ourselves with professionals - Pecnik! So.. after the pizzas we finally went to the summer house and enjoyed a romantic evening! You will probably demand that I define romantics. Well here it goes - Leon playing electric guitar, Zor playing on piano, Maja's endless happiness and laughing, Ana's singing, burning fireplace, Laško beer, cold leftovers of the monster pizza... did I convince you yet? 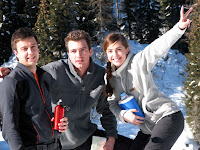 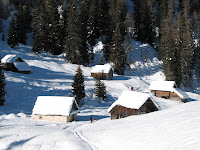 In the next morning, all the romantics was over, when we sluggishly prepared for the ski touring. When Marko joined us from Ljubljana, and we made a couple of sandwiches, we were already on our way towards new adventures. Because of the snow on the road and our summer tires, we had to leave the car very low. This meant an extra hour of walking on the snowy road. We were cooking a little jealousy, when a few cars rushed passed us. Nevertheless, we were quickly on the first mountain meadow Blato, where the real ascent started. Marko was on skiies for the first time, while Zor was baptized a week ago.. and was already walking like a pro. Ana, of course, not very fond of skies, was enjoying romantics with her crampons:) As we rose to the next two meadows - Jezero and Dedno Polje - the quantity of snow was not joking any more. However, there was a 5-10 centimeter frozen crust on top, which I knew was the worst combination for downhill skiing. So when we came to the last meadow, Mare and Zor had enough and decided to take a vacation there. So we bathed in the sun, listened to music, had some snowball fights.. and the best of all - danced Salsa in skiing boots and crampons:) However, like usually, Ana and I were not satisfied just yet. So we decided to go a little higher. We soon met an older skier who tried to convince us that it was mission impossible for Ana to continue without skies since there was simply too much snow. This made her even more stubborn and tenacious, and even though she was sinking deeply into the snow, we speeded up the tempo:) In the end, we didn't reach any serious mountains, because it was getting quite late, however we jumped onto a smaller one (around 1850m high) which probably had no name, but for Ana and me - it was more than glorious. 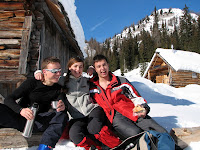 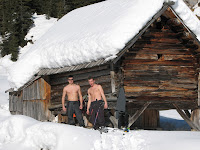 The downhill skiing was not the best I experienced... actually it was ****ing horrible. Hehe. It looked more like funny acrobatics on frozen snow. We still had a ton of fun! Zor was not very satisfied with the skiing, however, still concluded in the end: "Ski or die trying!" 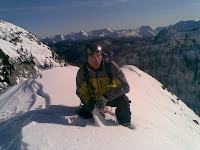 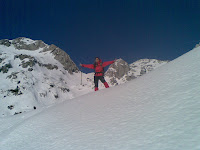